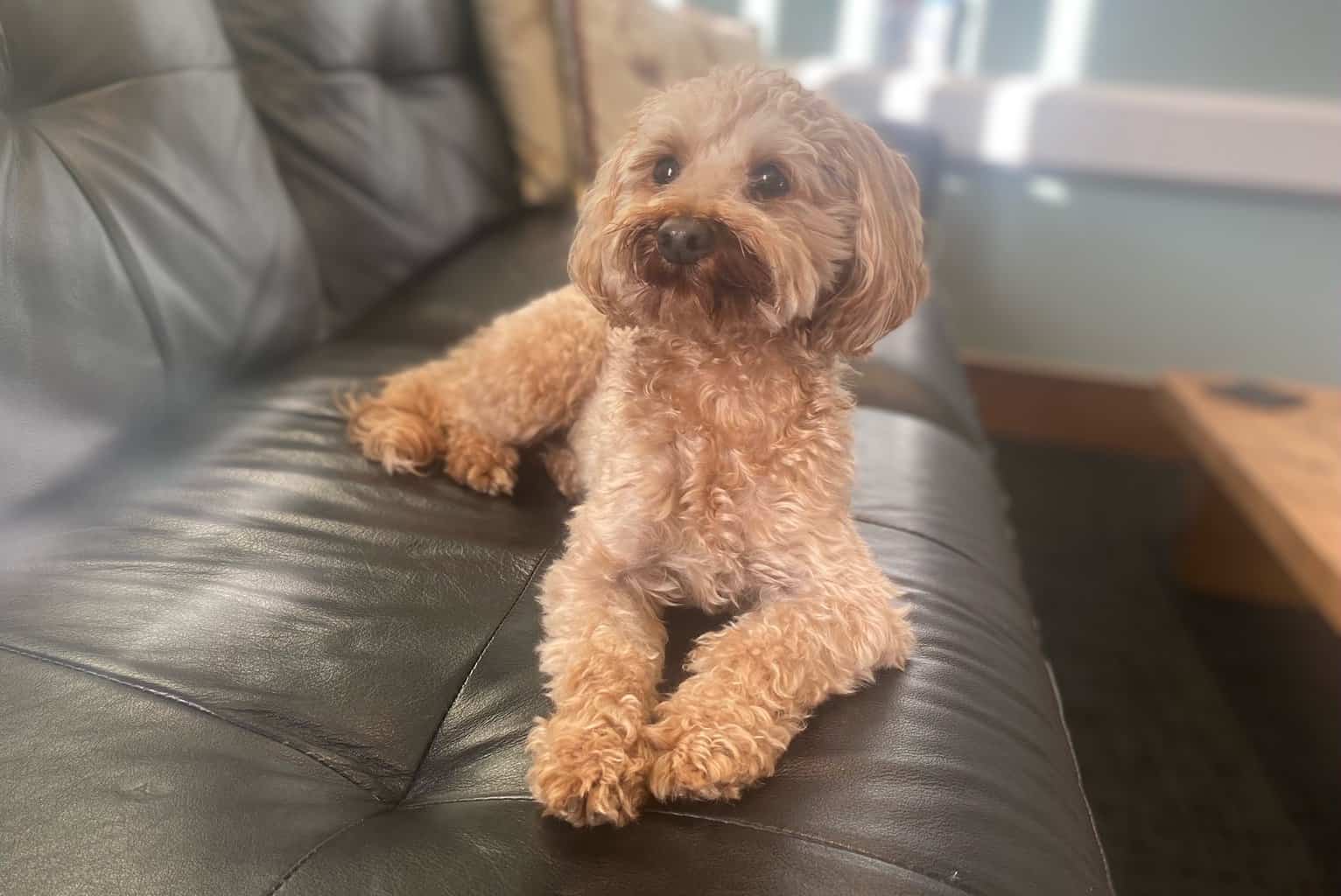 If you are in the market to adopt or buy a Yorkie Poo, you may have noticed some unusual abbreviations or terms in the listing. Statements like “F1”, “F2b” or even “multigenerational” may be understandably leaving you a little perplexed.

In this article, we will aim to dispel some of the mystery around these funny little codes used in describing mixed-breed dogs like the Yorkie Poo. We will also delve into what this actually means in terms of the appearance and behavior of the Yorkie Poo and whether the classification impacts the dog you could ultimately be getting.

The Yorkie Poo is the result of crossing a Poodle (a Miniature or Toy) with a Yorkshire Terrier. In hybrid dogs like Poodle crosses (also known as Doodles) terms such as F1, F1b, F2, etc are used to describe the generation and what mix of the two purebred parent lines are present.

How is a Yorkie Poo Created

Let’s start at the very beginning. The Yorkie Poo is a hybrid dog, meaning it is a mix of two different purebred genetic lineages. The combination in question in this case is the Yorkshire Terrier and Poodle.

As the Yorkie Poo is a Poodle cross it may also be referred to as being part of the “Doodle” clan, a moniker used to describe the vast array of Poodle crosses that exist and have been ever-growing in popularity since the early 2000s.

To create the Yorkie Poo it is universally the Toy Poodle or the smallest variations of Miniature Poodle that are selected in order to compliment the Yorkshire Terriers’ diminutive size.

History of the Parent Breeds

One of the smallest variations of terrier-type dogs, the Yorkshire Terrier was established, unsurprisingly in the county of Yorkshire, England during the 19th Century. Falling into the Toy dog category, the modern-day Yorkshire Terrier is favored as a lap dog who often sports an immaculately groomed silken hair-like coat.

This couldn’t be further away from the breed’s initial roots as a working dog who would be put to work in large linen mills to catch rats and other small vermin.

The Poodle’s origins are sometimes a bone of contention amongst nations with both France and Germany laying claim to this majestic waterdog. The general consensus is that the modern Poodle was likely developed in Germany in the 18th century. However, comes descended from a similar ancient heritage of the Barbet (the French water dog).

The moniker Poodle comes from the German “Pudel” which is a derivative of the German word “puddeln” which means to splash. This reflects the Standard Poodle’s impressive history as a working dog collecting waterfowl and game. The Miniature and Toy were later developed primarily as companion dogs for the wealthy of the time.

The Poodle comes in three sizes Standard, Miniature, and Toy, and is instantly recognizable for its distinctive low shedding, tightly curled, dense coat. They are consistently considered one of the most intelligent dog breeds and have the potential to learn complex tricks and commands.

When discussing mixed breed dogs like the Yorkie Poo breeders created a system to identify the mix of breeds present. They refer to this as the different generations of the mixed breed dog. We will give you a very brief crash course in these terms below using the Yorkie Poo as an example:

F1b or “First Generation Back Bred”

This refers to the situation where a breeder crosses a Yorkie Poo with either a purebred Poodle or Yorkshire Terrier. For example, if they back breed the Yorkie Poo to a Poodle the dog is still a mix of Yorkshire Terrier and Poodle but there will be more Poodle.

This refers to the situation where a breeder crosses two F1 Yorkie Poos. The overall mix of the pup would still be equal to 50% Poodle and 50% Yorkshire Terrier but the F2 lets you know it wasn’t a straight mix of the purebred parents, but rather a mix of two hybrids

F2b, F3 and beyond or “Multigenerational”

After this, it all gets a bit muddy and the further descended a dog is from the main hybrid pairing, the trickier and less useful it is to classify them. An F3 or third generation for example would be a cross of two F2 Yorkie Poos while an F2b would denote a second-generation Yorkie Poo back bred to either a full Yorkshire Terrier or Poodle.

Generally, most people will start to use the term “multigenerational” by this stage just to denote that there have been at least a few hybrid mixes to get to that point.

Hybrid Vigor in Each Generation

Hybrid vigor is a phenomenon associated with hybrid or mixed-breed dogs. It relates to the observed changes in hybrid dogs comprising two different parent breeds where the resultant puppy has its traits enhanced to the point that they are improved over those of the parents.

This largely relates to improved health and decreased instances of diseases common to the parent breed. Purebred dog lines such as the Poodle and Yorkshire Terrier can present with negative traits like increased risks of certain health conditions. This is due to the purebred practice of only breeding a Poodle with a Poodle or a Yorkshire Terrier with a Yorkshire Terrier. There are not infinite numbers of the breed and this can commonly lead to intentional or accidental in-breeding where a dog is bred with a close relative resulting in negative health traits being spread.

This phenomenon is most apparent in first-generation Yorkie Poo crosses and then appears to diminish slightly when second-generation or back-breeding occurs. Think about it, if you shift the weight to 75% Poodle and 25% Yorkshire Terrier this means any Poodle health issues have a greater chance of re-surfacing.

What to Expect from Each Yorkie Poo Generation?

As mentioned above, the first-generation Yorkie Poo is generally considered the healthiest variation. There are some downsides to a first-generation hybrid though. This mainly centers around the fact that mixing two different breeds is always a bit of a gamble. No one will know for certain how much they will take after which parent in aspects such as temperament, coat type, or energy levels.

This can vary even within the same litter of first-generation Yorkie Poos where some may take on a more Poodle-like coat, some may take after the Yorkshire and some may be that desirable blend of the two.

This can be avoided if reputable breeders ensure each of the parent dogs is a really good example of their own line to start with.

Breeders will often choose to back breed to control the appearance of subsequent litters a bit more. For example, if your first-generation litter of Yorkie Poos appeared to look more Yorkshire-like in appearance a breeder may choose to back breed to a Poodle for the next litter. As the weighting of the genetics will now be 75% Poodle and 25% Yorkshire this may swing the balance towards a more blended Poodle hybrid coat.

Equally, if the desire is for the most Poodle like Yorkie Poo, a breeder will pick an F1 who has taken on an even split appearance, back breeding to Poodle will enhance its Poodle characteristics even further.

Color can vary massively too. Poodles come in just about every color variation going while Yorkshire Terriers come in only four variations: black and gold, black and tan, blue and gold, and blue and tan.

Often the most desirable Yorkie Poo coat color and type combination is the soft wavy to curled Poodle cross coat with a remaining mirror of the Yorkshire Terrier’s black and gold or black and tan markings.

There is no surefire way of picking a Poodle parent that won’t override a black and tan or black and gold Yorkshire Terriers coloring in the resultant pup. Avoiding starkly different Poodle parent colors or markings can help. Often a black Poodle parent will be chosen and often a single color rather than a parti-color to try and encourage consistency.

An F2 Yorkie Poo is where a breeder can start to be more selective with aspects such as coat and temperament.

As we mentioned above an F1 litter of Yorkie Poos can have a big variation. By creating an F2 Yorkie Poo (the result of two F1 Yorkie Poo parents) breeders can seek out examples of what they feel is the best F1 and by crossing them there is a greater chance of consistency in the litter.

This means that a first-generation litter might have very varying coat types for example. If a breeder finds two Yorkie Poos (from different family lines) that both have the desirable Doodle coat type, then crossing these has a higher chance of a litter where all the pups display a similar coat. It is worth remembering though this is never a guarantee and sometimes you can get a freak genetic throwback and a puppy could still show a very Poodle or Yorkshire coat type.

Again color can be tweaked in an F2. If a breeder identifies two Yorkie Poos from different lines that have the most popular coloring, crossing these gives more of a chance that most of a litter will resemble them.

When we get beyond the F2 Yorkie Poo subsequent breeding tends to be around tweaking traits. They might introduce back breeding an F2 Yorkie Poo with a Poodle again (an F2b) to re-establish some more Poodle traits like a tighter coat.

Once we get past F3 it gets harder to say any breeding choice is being made solely to enhance rather it is often commercial breeders who keep a pup from each subsequent litter to continue. In bygone days at this stage, a dog would rather unflatteringly be referred to as a “mutt” which really meant a dog with significantly mixed hybrid breeding rather than a purebred line.

One slight warning about picking a Yorkie Poo that is described as multi-generational is that the further from the core parent breeds (Yorkshire Terrier and Poodle) that you get, the harder it can be to track any health issues that may be developing down the breeding line.

Equally some less than scrupulous breeders have been known to introduce other breeds through not fully knowing the mix of the Yorkie Poo they may be using for F1b, F2, etc. You could then end up with a dog that is no longer a true Yorkie Poo as somewhere a parent dog may be the result of a cross with another Toy breed.

The different generations of Yorkie Poo can offer up other pros and cons and it is ultimately up to the owner to decide what is best for them. Having an understanding of the breeding classifications can help when doing your homework on a breeder.

Remember all knowledgeable and responsible breeders should have an understanding of the hybrid classifications and be able to demonstrate the type and history of the litter. If they can’t this would be a warning sign.